Lets keep this simple, but clear.

I load up the savegame because the game took a while, I killed the witches on the west, I killed the 4 portals, the drawbridge connectors and went after the portal with everything I got.

I left the workshop intact.

After killing the emperor, it gave me a screenshot. a movie view of the current area.

Meanwhile the emperor has been dragged away to the prison by my minions, and I get his taunt on the below screenshot. The game froze after that, with the current screenshot happening. 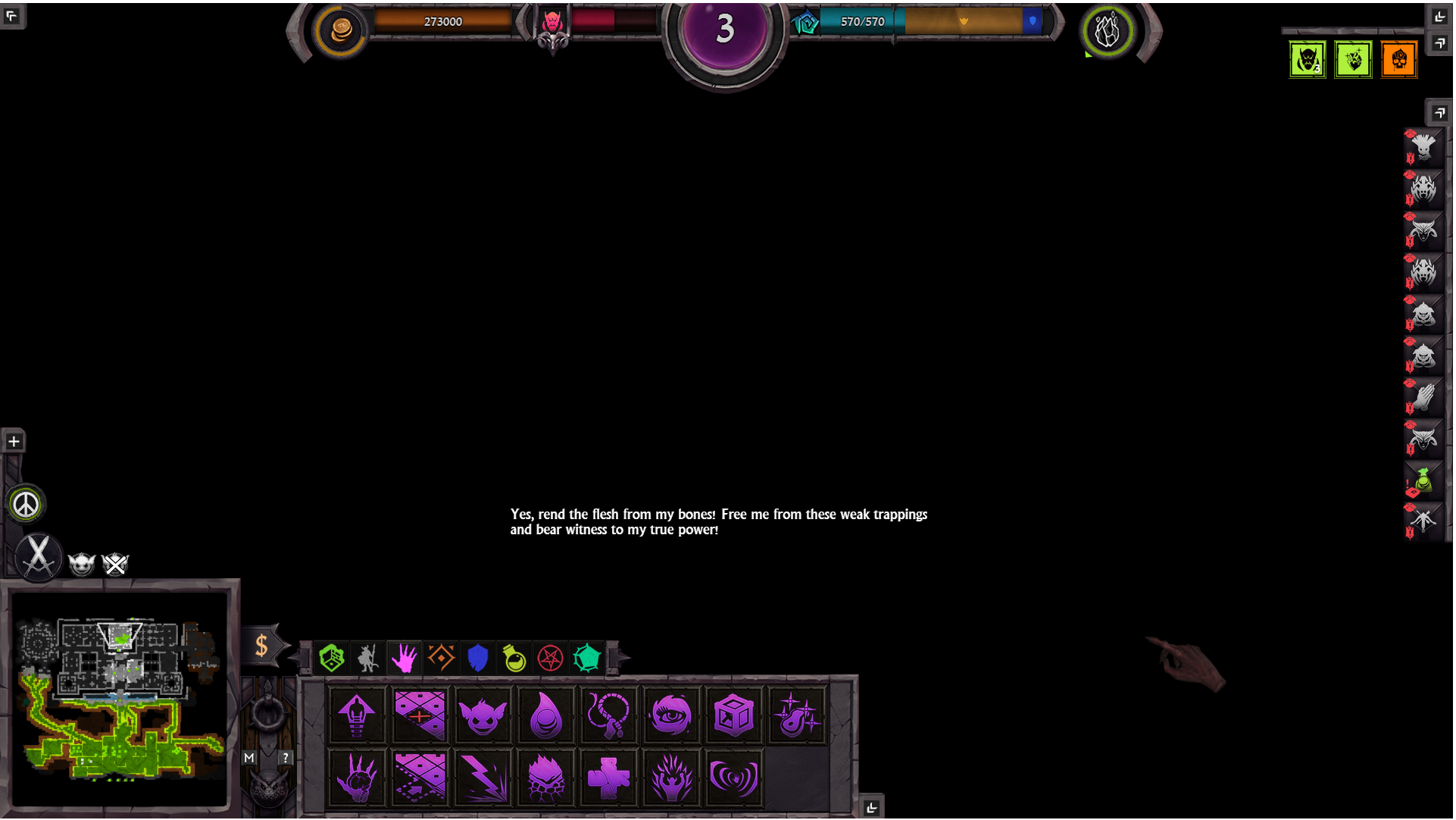 the User interface itself is responsive but the game itself is frozen, causing no minion movement.

The mouse was able to move, but after some experimenting around and moving to a edge the viewport itself was frozen and didnt want to get back.

C: 255 mb left unused (if it saves files during the game on the C: disk it might be a point of failure,

Hopefully this will help with your investigation to the bug. :).

Resolved the issue in a quick , and way better way as I thought to be possible, keep up the good work! :).

Satisfaction mark by Jasper 5 years ago

Hello Jasper,
your log is cluttered with some errors in our scripting system.
So clearly something we need to look at and fix.
Thanks for sharing savegame & logs.
We will get back to you in case we get further questions.

Hi Stefan. You might remember me from the other bug where I was having a different problem with level 13. Since I got past that part, I've now run into exactly the same problem Jasper is having. I'll attach my logs and saves in the hope that it helps.

What have we done?! :/
Seems a little issue introduced by a mate who is already in xmas holiday.
I am going to quickfix these errors for next hotfix and I hope it rapairs it.
Please let us know after v1.5.f12 is out.

I wonder if this is related to an issue I had with the previous level, where you face off against 3 keepers. It didn't break and I was able to complete it without issue, but the intro went on for ages and some of the dialogue seemed strange and out of order. Like the gold woman mocking others for being attacked while I was destroying her core for example. I might replay that level after the next patch and see if anything changes.

I think both are unrelated. The timing of the dialogues is driven by different code then what caused this problem.
We will get an hotfix out to get a rid of the errors you guys got in hope it allows you to finish the level again without problems.

OK hotfix is out, should work now.
Let us know if its alright now.

Only comment for me is the leveling part is a bit unbalanced, but heard the developers are working on it. Sometimes it feels like it takes long to level sometimes it feels its too short. Last level they attack you a little bit too early, might increase it by one or 2 min, for preparation purposes, first battle was offcourse the hardest with lvl 3 vs 7,8,10. The lightning spell helped me out in this level allot but also in lvl 12 to beat the blue player. Vampires are hard to keep, but thats a trade off I guess. It is kinda funny, in last level of DK1 level 25 , blue had allot of vampires, now you control a bunch of vampires. :').

If you want to increase the difficulty on the last level, change the waves of incoming creatures, to higher level creatures further on the game. As DK1 did it had one massive end game with allot of creatures everywhere.

Other suggestion is to get more creatures from the portals, while you are trying to attack them. Which would feel like , someone is attacking our portals, defend this place!

Specific part about regeneration of traps if this actually works or just a side objective, so far what I have seen it doessnt do anything and you can ignore the optional quest.

Overall a awesome game :D, this honors dk1 allot more as dk2 did in my opinion :).

Yes, that fixed it!

@Jasper
I will point people responsible for the game design to have a quick read of what you said,
but beware we are thinking a lot about such topics but are a very small team.
It's not very easy to get it just right for everyone, but we try :)

I am glad it is working again for you guys, thanks for reporting back.