Have seen it many times. When creatures, including workers, go somewhere, they don't care much about avoiding damage from tiles. Even if there is a clearly safe path nearby, they often prefer to go near lava/melted gold tiles, close enough to lose health. If you have workers mining golden shrine near lava, they will move near it all the time to carry mined gold to your dungeon, and eventually will die.

For comparison, in dungeon keeper creatures actively avoided lava. Dunno if it's a bug or a feature to encourage players to build more stone bridges though :)

Certainly sounds like a bug. I'll try to replicate but is there any chance you could upload a video or a screenshot of a specific tile layout where this is happening? From there it should be a quick job to get it off to our code team :)

A worker decided to take a shortcut after claiming the last tile. 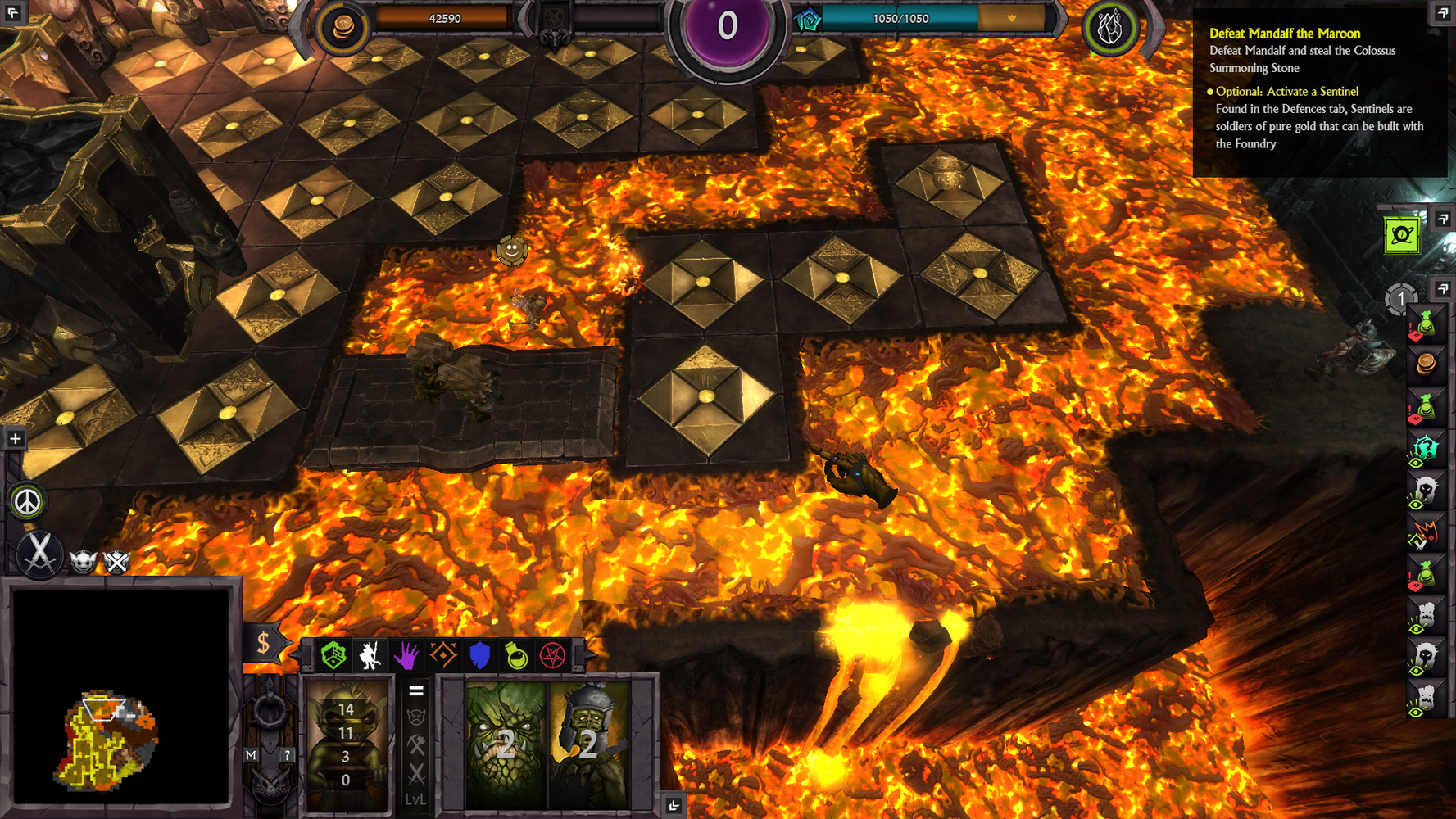 Here I dropped some gold to the last tile. It works like a very effective trap against workers. Harder to do it with other creatures, but still possible sometimes.

Can't say I'm having much luck replicating this. Even tried a setup in the same place as you and all my workers keep to the bridge.

Can you confirm all the additional information on your system as per How to: Submit a Bug Ticket

In addition would you be able to upload your save file just in case there's something very unique with how you set up your dungeon that is causing this.

Also if you've tweaked any options in the menu it'd be good to know :)

You need lvl4 workers use blink, it greatly increases the change to get into lava. Speed up at lvl7 (if I'm not mistaken about the level) also helps. It also somewhat depends on dungeon geometry, ie where the next workers target is, so it's a bit random from attempt to attempt. I didn't saved when I made those screenshots, I started anew, but new dungeon geometry made it less successful. Still don't have troubles with burning lvl 4 workers by dropping piles of gold to the last tile. dlc1_campaign_level1_name_20160629213300.meta

Thanks for the additional info. Definitely the moment I had level 4 imps it started happening reliably and with level 7 it did indeed appear to be slightly more prevalent. Seems that little area in Heart of Gold level 1 is a good place to reliably replicate it as well.

Going to pass this off to the Code team now :)

Repo Steps: 1. Start Heart of Gold Level 1
2. Kill off your workers and spawn a group of level 4/7 workers

3. Dig out the area above and create a bridge as pictured.

4. Drop workers in on the final tile or create tasks for them to fulfill there

5. Vary dungeon layout, I found a vault to the east of the Dungeon Heart helped to replicate reliably.

Another popular place for lava bathing. 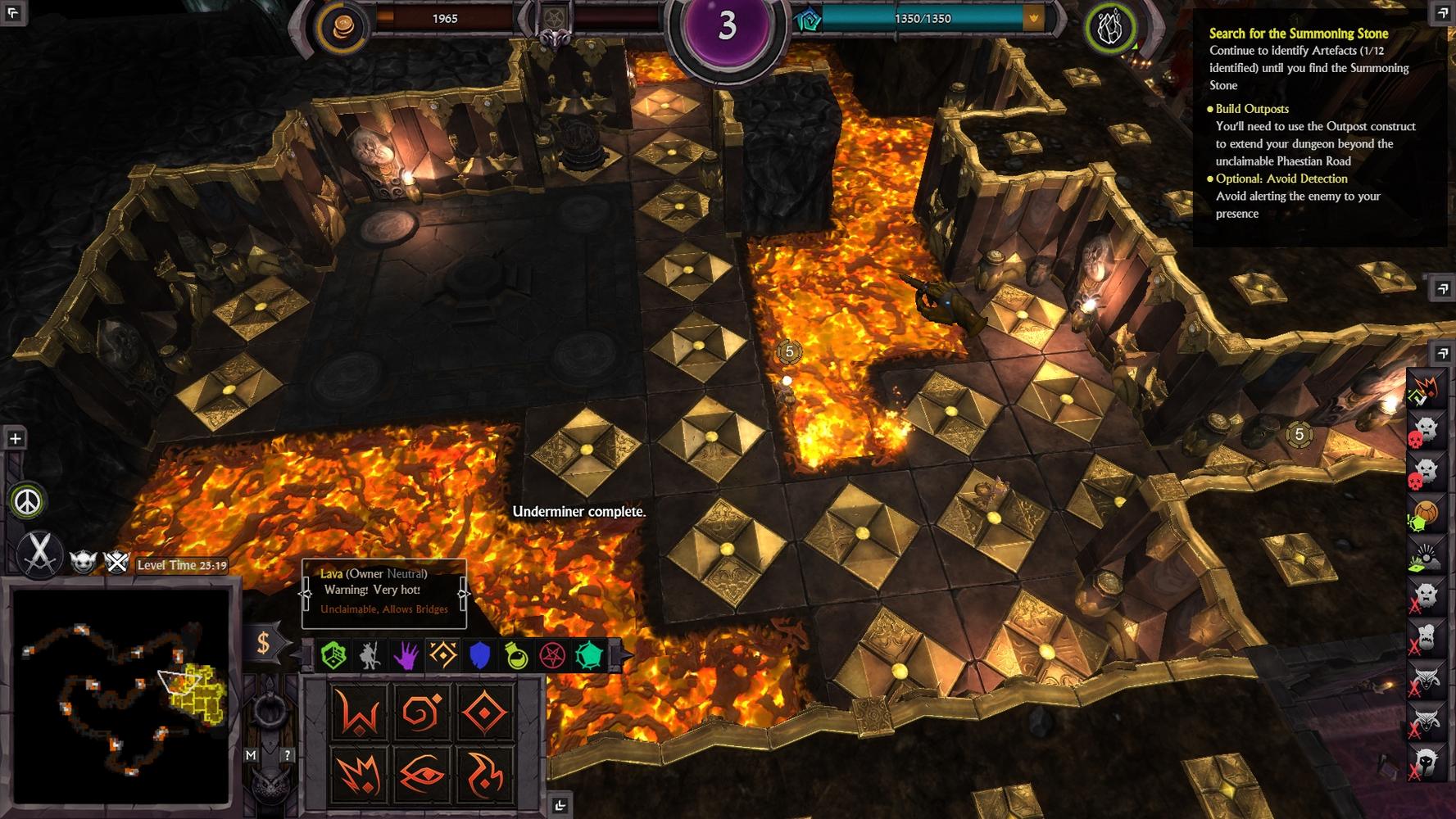 Just to give some feedback on this topic.
WFTO uses some physics so that accelerated objects have a momentum depending on their speed and weight.
The pathfinding does indeed avoid lava quite fine, however when very fast units eg. (Spirit) Workers get to high XP levels,
they can become soo fast that their steering can not fully keep up with the centrifugal forces they accumulate on a stiff turn.
This makes them slide of like a car which is too fast in a turn.
Most of the time this is no issue as contacts with lava happen for only very short time, so they should not be very much impacted.

They would never cross large chunks of lava straight, but only scuff it a bit due to their high momentum in turns.

It is not very easy to fix this properly without making their movement look unrealistic.
Some of our minions are a bit too fast for a physically simulated world when leveled up :D

I guess you never lost any unit by this, did you?

Thus I would like to let this report in our low priority list, so we can get it done if there are no more major issues to resolve.

I hope this is OK?

That explains why haste potion increases the chance to get into lava, and not only for workers :)

Sure, it's not a major problem.

Maybe add some buffer around land near liquid tiles, that is barely enough not to get hurt if you are on it? Speaking about realism, that would add to it. And the buffer in the inner corners of land tiles should be a tad larger, so you could take shortcuts w/o touching the liquid.

Workers are being slowed down in the next update, this should help prevent them from walking into lave like this.

For now this is unfortunately the most we can do without changing how workers move.