While playing lvl 1 of the Heart of Gold campaign I've encountered a quite peculiar bug.

Given, the bug isnt directly blocking me finishing the level/achievement by simply restarting

Now to the problem that apeared:

While i tried to get the "Stairway to Heaven" achievement i saved my progress in the midle of the level and reloaded the game later. by then, I already destroyed the Gateway where Mandalf first respawns from and the one which is located in the lava-river.

Now after reloading, the first mentioned destroyed Gateway (which i already claimed)

an near INFINITE WAVE of LEVEL 2 TEMPLARS !!! 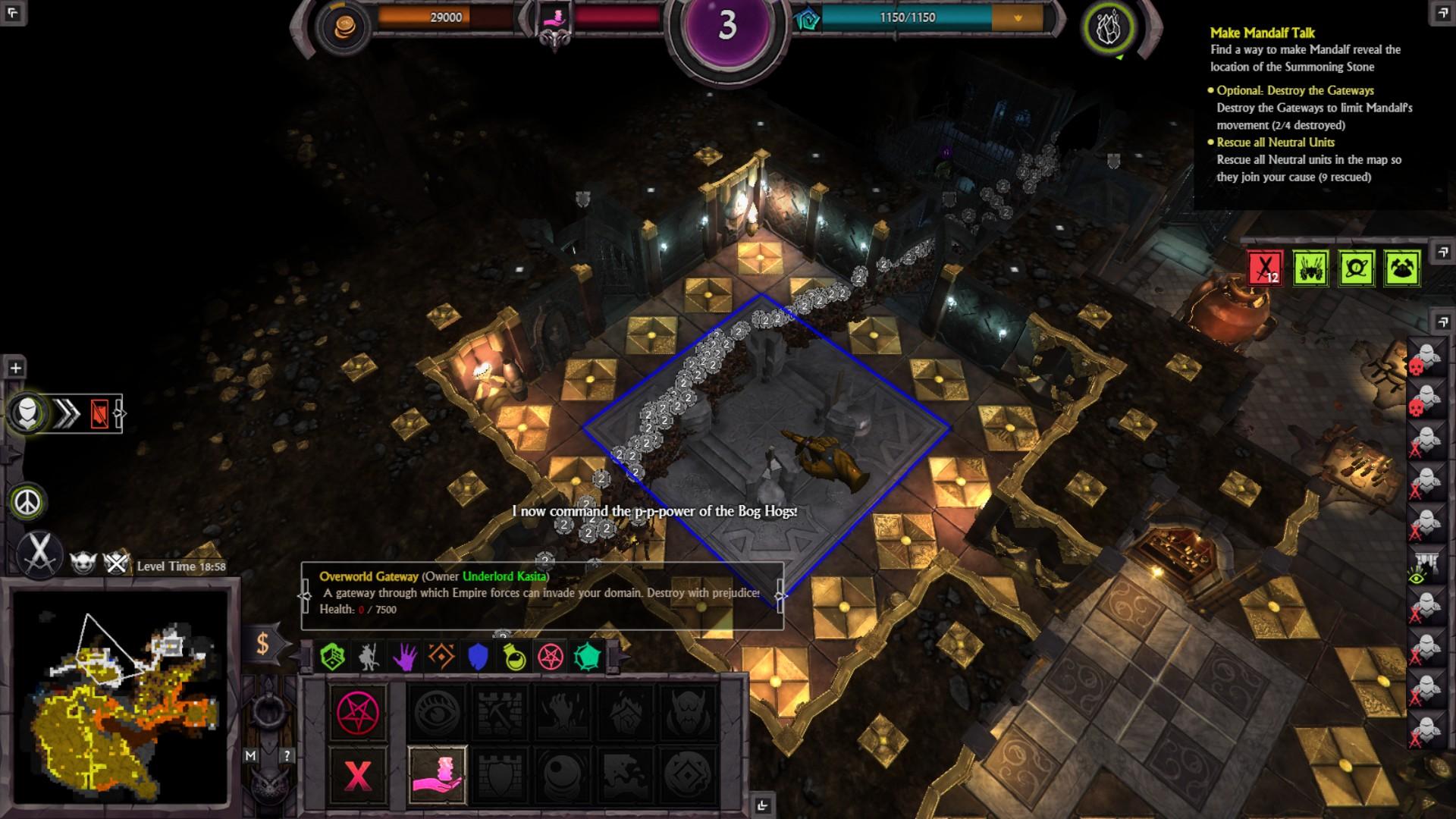 only after Mandalf respawned (i think he was lvl3 by then) the spawning stopped.

which were crusading all my sentinels to death, but they also encumbered the game so much that it crashed one minute after.

An interesting sideffect to mention: another strange thing that was going on was that some unknown entety was using the lightning spell on my minions but on my own tiles.

(this very much confused me, since you dont play against another Underlord in level 1 [maybe not an official one but something that is set up in the missions mechanics that went wild? idk ])

-tiles around, aswell as the Gateway itself (Mandalfs first respawn point)

were claimed by me, the second Gateway, too

-game was saved after Mandalf died

but i don't know if the problem ocurs often, haven't yet found someone who encountered the same bug and maybe i just became quite unlucky

I hope i did everything right, especialy since i never reported bug before and because english isn't my native language

If any information is needed (or in case i didnt took the right safe file, still not sure if i did it right)

just contact me per e-mail, and thanks in advance for fixing the problem ;)

That's a truly impressive bug, thanks for the in depth report on it and don't worry it appears everything is right from what I can see. Especially pleased that you submitted a save file.

I had a chat with the coders and it seems we have seen this once before but only once and we could never replicate it. We think that the issue might be fixed in the next patch anyway due to another fix we implemented but we'll take what's here and check what we can find anyway.

Essentially what's happening is for some reason Mandalf has failed to spawn at the correct timing, as part of the script where he spawns his guards are also spawned, because the scripting engine detects the fail it attempts to loop in order to reach a success state. So it loops the spawning of the guard until whatever is preventing the Mandalf spawn is gone and it successfully spawns him.

Anyway I'll pass this on now, but you may very well find this will be fixed in the upcoming patch! :)

Thanks for the fast and detailed response.

Happy to hear that the team is already behind the problem and that i haven't messed up by posting the wong file.

I am currtently trying to unlock all Heart of Gold achievements to unlock the Kasita Silver theme and if i will find anymore major bugs i will report them to you in detail to make it as easy as possible to find out what caused them.

The reason i posted this in the first place was that i was worried that people, who are less patient than me, would lose progress.

(I tried to do the achievement and relaoded serveral times, then saved over the previous state which locked me in the debacel and i lost 45 minutes of progress [though i rushed through it in one organized run later. ] )

Don't know if it is relevant, but one other minor bug i encountered was that in lvl 1 of HoG saving right after the camera-guided cutscene and relaoding the game, caused the camera to slowly drift the camera in some "north -western" direction, though i can give litle information on it since i restarted and saved ver the file.

( the error remained consistent and i tried all keys and mouse directions, so i don't think it was hardware related)

Greeting to the Team, my thanks and have a nice day ;)

Hello Bulbaneer = ) I can confirm the bug you encountered should be solved in next patch ^^ Thanks for reporting the bug ! :^) Have a nice day 8^]

Sadly, this bug is still here.

It is exactly the same as Bulbaneer explained it: infinite spawns from the destroyed gateway, and continuous lightning strikes by an unknown entity on (an empty tile not far from the dungeon heart) after savegame is loaded.

Can you confirm the version number of your game (top left corner of the main menu) and if possible please include your save file where this issue occurs. How to: Submit a Bug Ticket

This save file proved invaluable ! Thank you very much for helping solving this long standing bug

0
Completed - Next Patch
anonymous 4 years ago