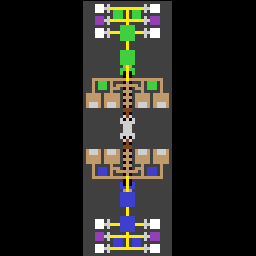 AI (master, Steven Fight) in this map develops very slowly. But my main gripe is not that. that when visiting another 5x5 room, he again builds his beast den - despite having 2 gateway, he needs to build another room in order to attract sentient beings. Watch the video.
And each received in the room (free from bombard and other protection) - it builds again beast den (and for some reason always, 3x3).

Because of this fantastic stupidity, the AI has no chance against a man and play with him - loses all meaning and interest.

By the way, initially, the same card was without beast den, just a spare room 5x5. And in this, the first version of the map, the AI didn't build beast den just (he built the Archive), and having no combat nicov (animals) - couldn paluel access to him. Because everything else on the map closed Imperial static protection.

1. AI, if the access gateway is closed by the defense must build a beast den. Otherwise it just will not be able to do anything on the map, just wait your death, it is logical?

2. If AI is beast den, and there is a gateway in the new territories have to build new rooms to attract creatures from the gateway.

Please fix the AI, according to the paragraphs above.
Apparently, closed territory defense - AI turns into a complete degenerate, incapable of action obvious.

Watch the video 2, AI, having first beast den, and received (with my help, and I cleared the protection of the fire demons) access to the 4th room (and more rooms on the map or not) - building a beast den again, in every room.

ill have to inform our AI-coder on this.

We will overhaul the AI in the future (after the HoG patch) and are only fixing issues that break the gameplay on the AI.

this issue has been brought up but is currently somewhat on the back-burner due to developing new content. This will be addressed however either soon after 1.4 or at latest with the planned AI-overhaul.

i will mark this as complete, not because its fixed but because we are aware (thanks for that) and to clean up the backlog of userecho.

thanks for your report.