Lvl 4 Heart of Gold: Minions getting stuck and glitching about in captured enemy Tavern

The bug is NOT game-breaking, but it does cause some annoyance

So i was repeating lvl 4 to get the "Gauntlet" achievement.

When i was ready I breached into the Fortress and raided it part for part.

Then, in the upper right part of the map, in the Tavern/Pigpen, my minions started

getting stuck in very weird ways. They were literaly not moving, ...or they were, if

in sudden glitch movements at that where, from time to time, they teleported to other parts

of the map, most frequently though to the right pathway of the tavern, at the bridge specificly.

Also, not only did they do that, but they also were kinda "levetated" sometimes, which ironicly kinda made them look like they danced on the tables.

(The real problem for me came from suddenly missing about 12 strong minions in my attacks force, including my 3 lvl10 campires and all minions refused to do any actions as well as eating, sleeping and taking wage when placed on apropriate tiles) 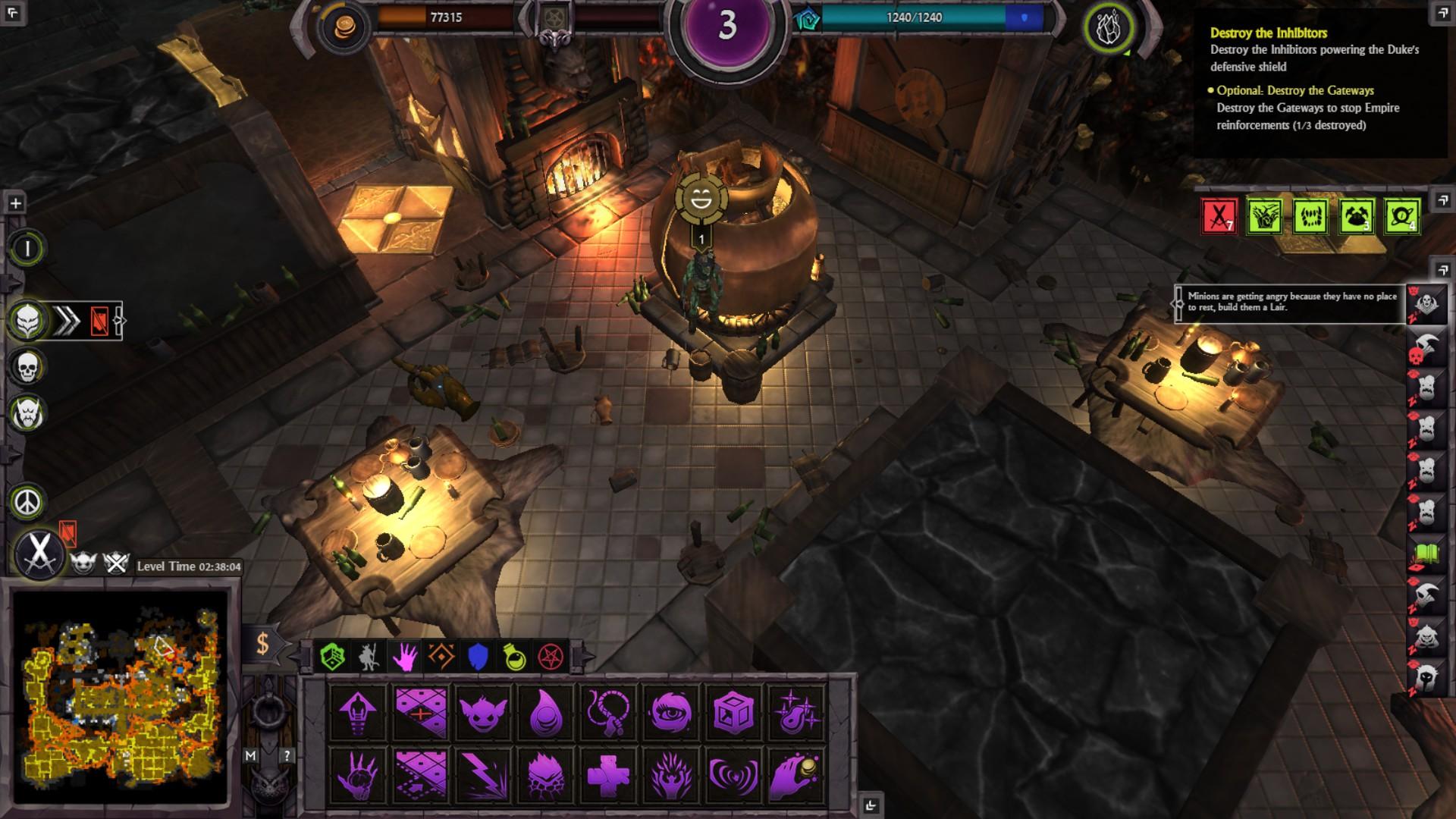 (picking the minions up also didnt prove a solution as they remained paralyzed, even when brought back to even ground) 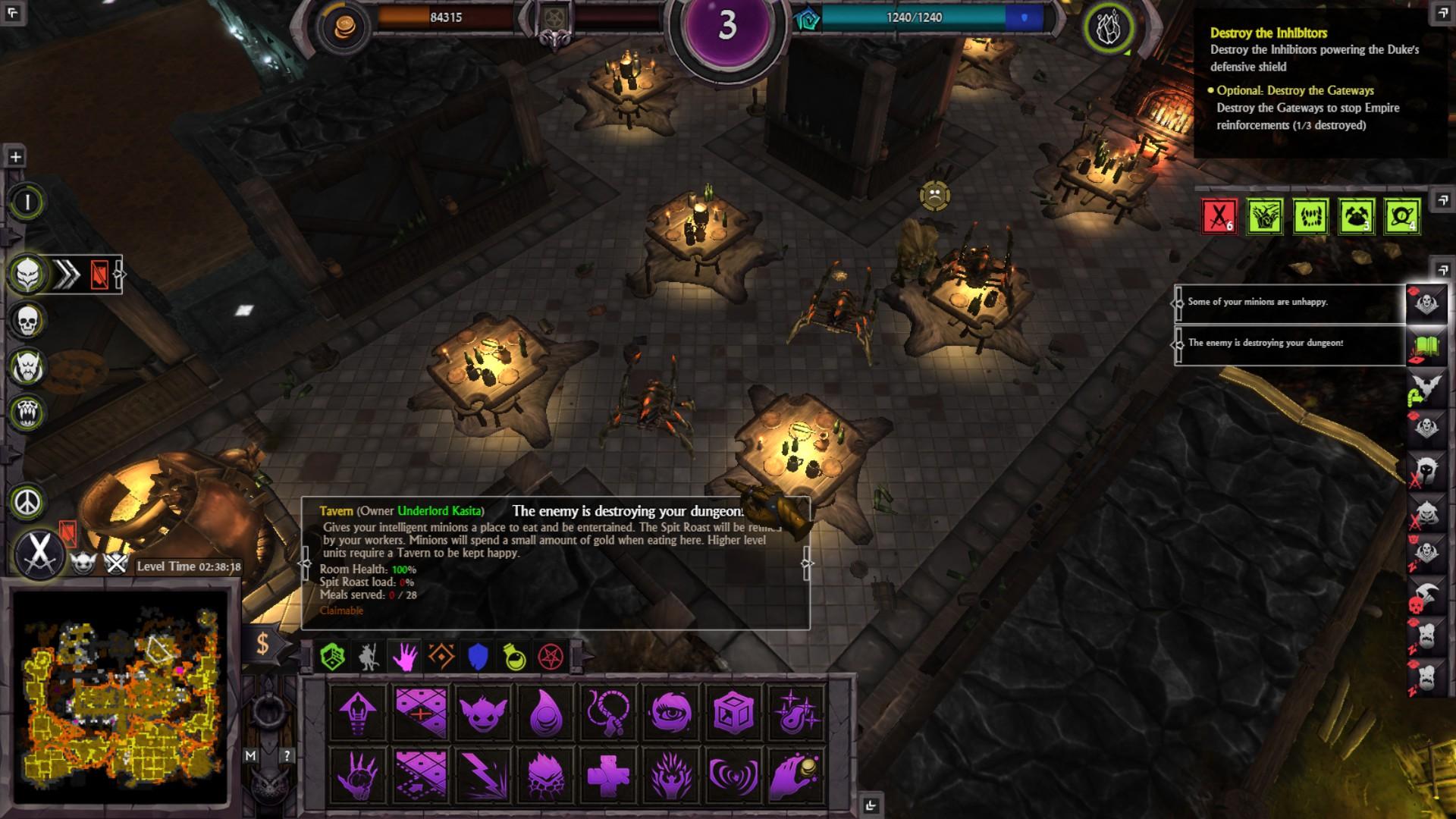 (Sadly, i couldnt catch the minions on screen when they teleported away to the road cause i failed 5 times and then they stopped doing it) 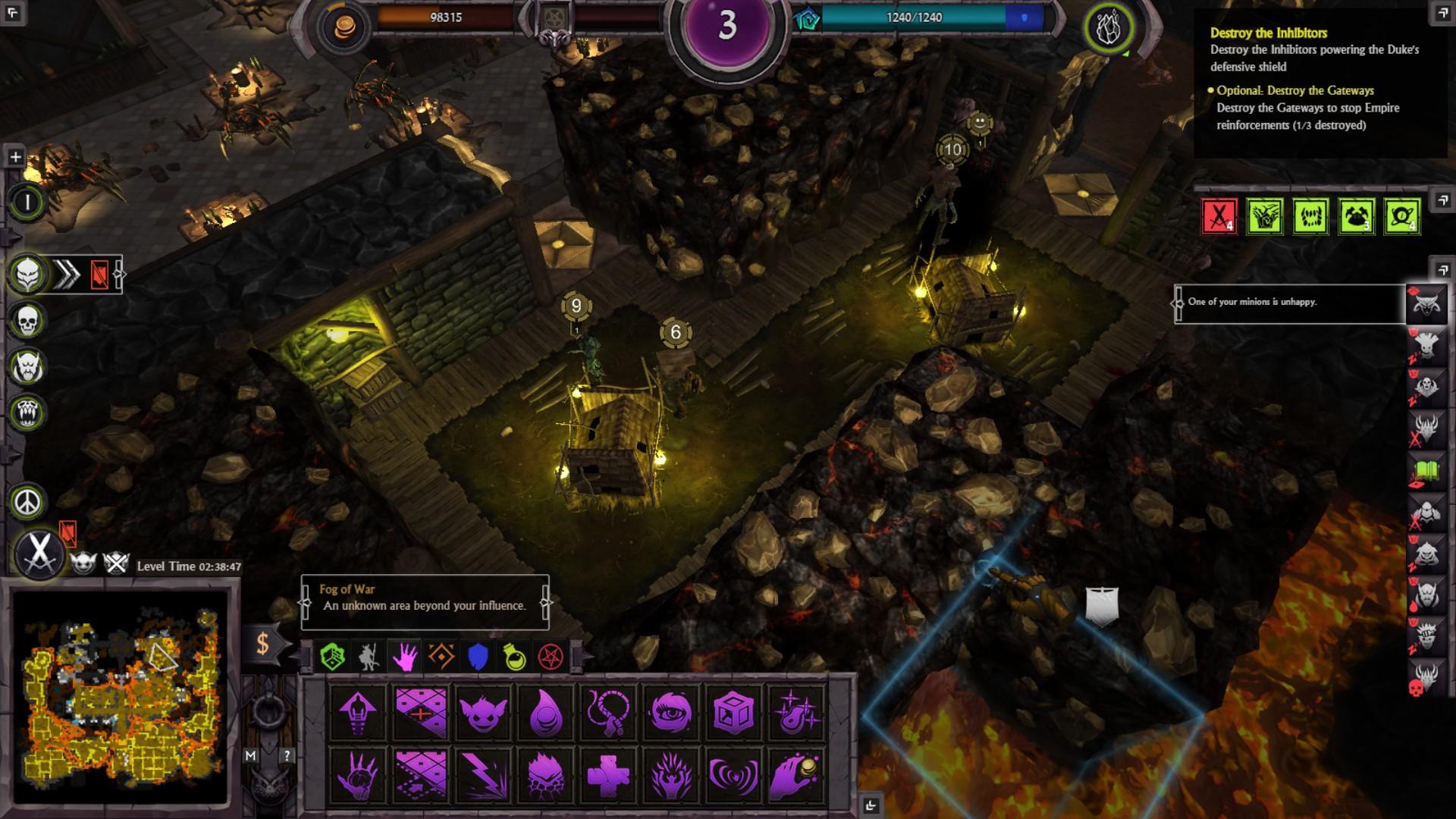 The Worst Part though:

I couldnt get a save since when i opened the menu and wanted to make save-file, my game just spontaniously crashed. Thus, the only thing i can offer to help with the problem is my last save,

which is not close to the event at all since i got overconfident :X

(besides that, a gateway was destroyed for some reason what spoiled the achivement, may have been minions that rebelled since they couldnt move, oh well)

I cant realy put my finger on what caused this, but i think my "Haste-Potion Mob Strategy"

may have contributed to the Problem.

-The minions started glitching before the room was claimed by me, though the glitch remained after i claimed the other rooms

-most minions that got stuck were in a warband (though if i remember correctly, the vampires were not, and they glitched, too)

-minions were lacking their wage and needed sleep, as well as food

-minions were moving while under Haste-Potion influence, as well as facing oponments

If it helps, i can confirm that i encountered similar minion behaviour on a skirmish mission from oneof my self-made maps where minions got stuck in a destroyed enemy-dungeoncore.

I can not contribute any information on that ocurance though since my game was laggy, and didnt look into the specifics and ended the game fast.

If any more info is needed, contact me per e-mail or leave a comment and I'll gladly try to help.

Thanks for your report Bulbaneer, this is indeed a rather strange issue and certainly seems rather unique.

I'll look into the save file you provided but If the issue is not present immediately the chances of recurring are rather slim. I'll attempt to follow something similar to your strategy to see if I start seeing similar occurrences.

If you still have it your Output Log would be hugely helpful, it's possible if the game crashed that it may have created a crash dump folder with it as well. Also dropping your System specs as per the How to: Submit a Bug Ticket topic is always useful.

And I got some more anoying news...

None the less, after reading this i wanted to go at the save-file once more and finish the achievement and see

if i cant do the map or even recreate the situation for you by chance... and well... the save file makes the game crash.... everytime i load it.

I can offer you the Output file of that, though i doubt it will be of any help, and it could be that this was caused by the latest patch anyway, so doing things anew will not cause the problem in the future anyway.

So, all i can realy do is give out my specs to help out at all :(

The game is installed on my HardDrive, NOT my SSD

So yeah, I'm realy sorry that i wasn't realy of much help in any way :c

so no one has to deal with it

In the meantime, I will be in a corner, crying about my 2 hours of lost progress.

Thanks for the effort!

does anyone know if there exist bugs that make you crash when you enter the posession-perspective?

I tried to posess a Bafu, and my game crashed instantly..... once again...without saving

I think the savegame crashing is likely related to this thread: http://brightrockgames.userecho.com/topics/1236-after-142-update-i-can-not-load-some-saves/ Try rolling back to 1.4.1 via the betas tab and see if your save file works again. (We're trying to build a new hotfix version but all of a sudden unity is throwing up some unusual errors.)

With regards to possession I've seen only one crash related to that and neither we nor the person affected could replicate. It seemed that his game entered windowed mode all of a sudden while possesion was occuring and suddenly the game crashed.

Closing due to lack of customer feedback. Just so you're aware there is now a hotfix on the public test branch for the issue highlighted above. :)