As you can see on the picture below enemy creatures are stuck in my Prison. I was playing 2.0 custom map and after having seen for a third time on different map I've decided to open this ticket. I had to manually pick up and drop these creatures again to the Prison to "unstuck" them.

It seems like they're trying to walk to their lairs (at least it seems they're facing their lairs), but they cannot because of imprisonment. What could empower this statement is that bug doesn't apply to white player heroes and when imprisoned owner Dungeon Core is destroyed. 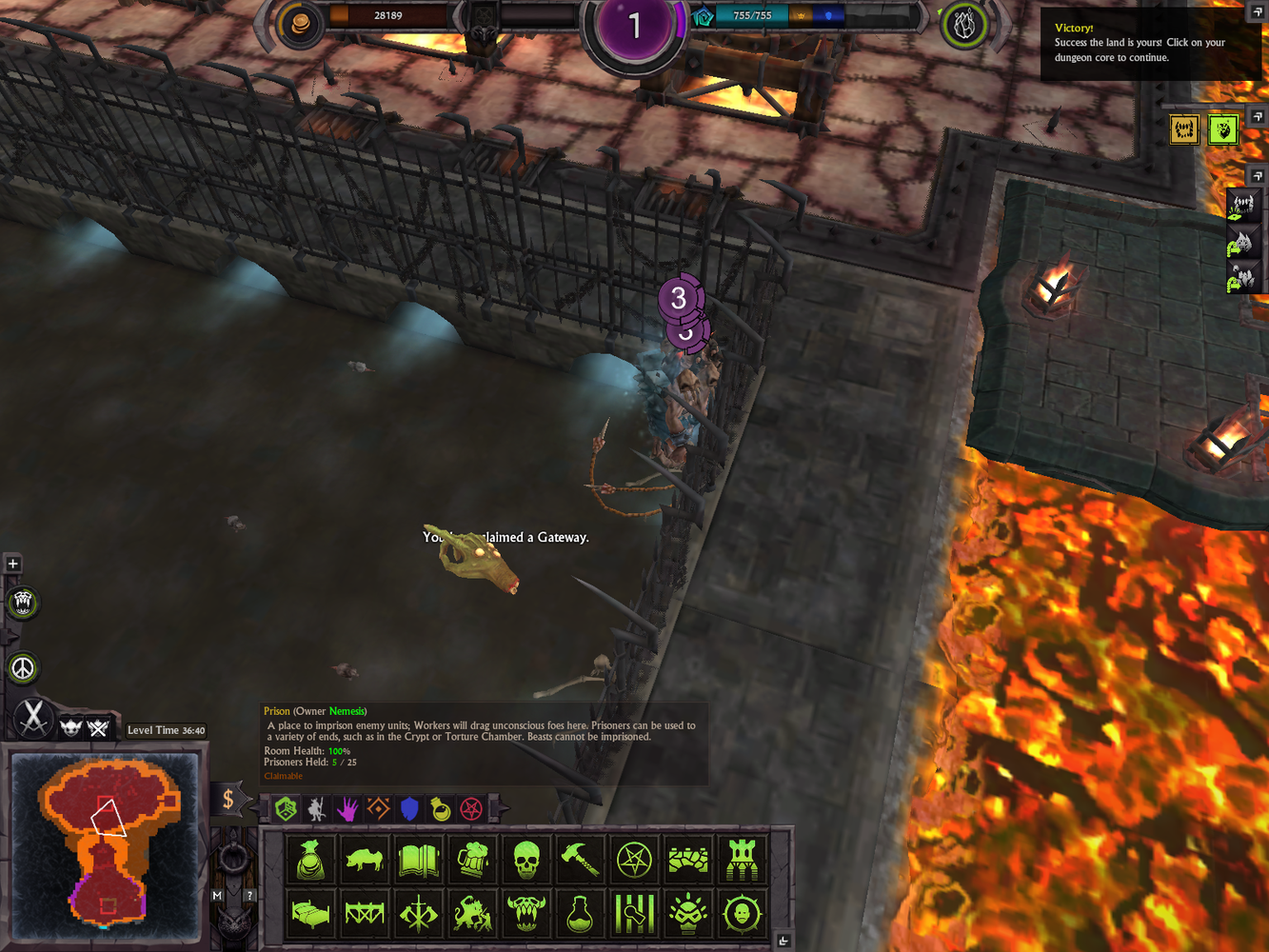 Sorry to hear you've encountered this issue, it's the first time I've seen a report of this issue.

I wonder if you could chuck us across a save file (How to: Locate your save files) where this problem is occurring and also let us know which maps you were experiencing this on? In there a particular set of circumstances you created to make this happen or is it just generally happening on all levels?

It was a 2.0 custom map from on of the custom campaigns. It was 1vs1 level.

To recreate described situation would be to fight 1vs.1 with hostile Underlord and imprison some of his creatures, than beat him.

I would need to make some further tests to find out the root of that issue. I don't have a save file with that unfortunately because I couldn't save the game (that happens while playing older custom maps, it goes back to menu immediately after you click save).

PS. Why being sorry about something that isn't your direct fault or is intentional? Sounds more artificial than empathic to me. ;)

The issue you're describing with being unable to save sounds much more serious, can you please send an output_log.txt from a match where you've made that happen?

I was able to recreate the bug in the same level. I had to however load a save state in before destroying enemy's dungeon core. I can see one of them appearing one tile away from the pile and than going again and again to the pile (as you can see on the picture below a Beat Master was captured during making this "sudden move").

BTW, it seems angry enemy creature are still angry even if locked in prison and BTW2: after loading the game rally flag is ignored if it was placed before saving the game). I was however able to save the game during whole play, so maybe I'll get "more lucky" in other older custom maps.

A save file after that happened - unfortunately after loading it prisoners get unstuck, so I attach a save file before an direct attack on enemy dungeon core:

Just load the game, order all minions to attack enemy dungeon core putting a rally flag on it and that watch the Prison, soon you'll see this happen. In the beginning prisoners look like they suddenly want to attack one of my creatures passing by, trying to walk through prison bars, than they go to the corner trying again to walk through prison bars.

EDIT: Actually you can just load the 20190529180133 save file and wait patiently, this bug should happen soon in the prison. I didn't have to destroy enemy's dungeon core. Around 31:50, just before enemy is casting an Uprising.

Thanks for all the info, this issue will be reviewed during our next WFTO bug pass